Ashmansworthy and Alminstone classes were very lucky to have three visitors today who shared their experiences from WWII with us. Mr Gordon Lott lived in the village during the war and told us what it was like when the evacuees arrived from London and other cities. His cousin, Ted Lott, was a child whose family had evacuees stay with him in Woolsery. Our last visitor, Mr Annand, was an evacuee from London who was billeted to a farm in Parkham when he was just four years old. Between them we learned about how the war affected children from 3 different perspectives. It was very emotional when Mr Annand was recalling how he was separated from his mother and sent off to the country, not knowing when, or if, he would see her again. The stories that they all shared with us are invaluable and gave all the children a detailed insight into what it was like during the war and how it still affects them nearly 80 years later.

The children asked very sensible questions to help them understand more about their experiences. They then shared their work with them back in class and talked to them about what they have been learning. It was a very positive experience for both our guests and the children; for the children to hear first-hand about what it was like during the war and for our guests to talk to the class about their understanding of the war. This will give us some fantastic ideas and inspiration for our writing. 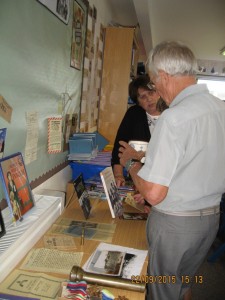