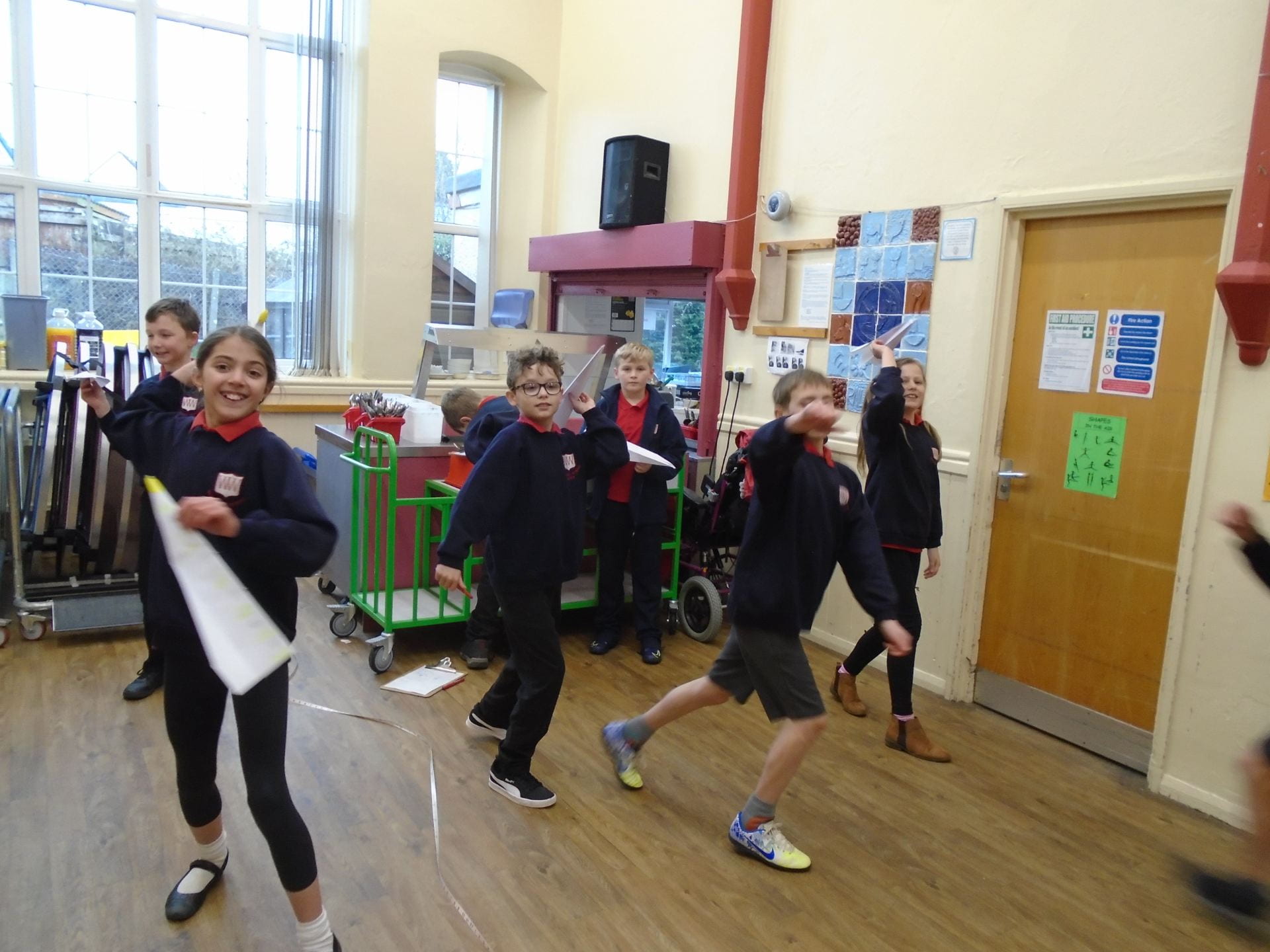 In science this week, Ashmansworthy class investigated forces by testing paper aeroplanes. They measured the distance they flew and tested changing different factors such as size, weight and design. We found out that bigger aeroplanes flew further and heavier ones flew shorter distances. 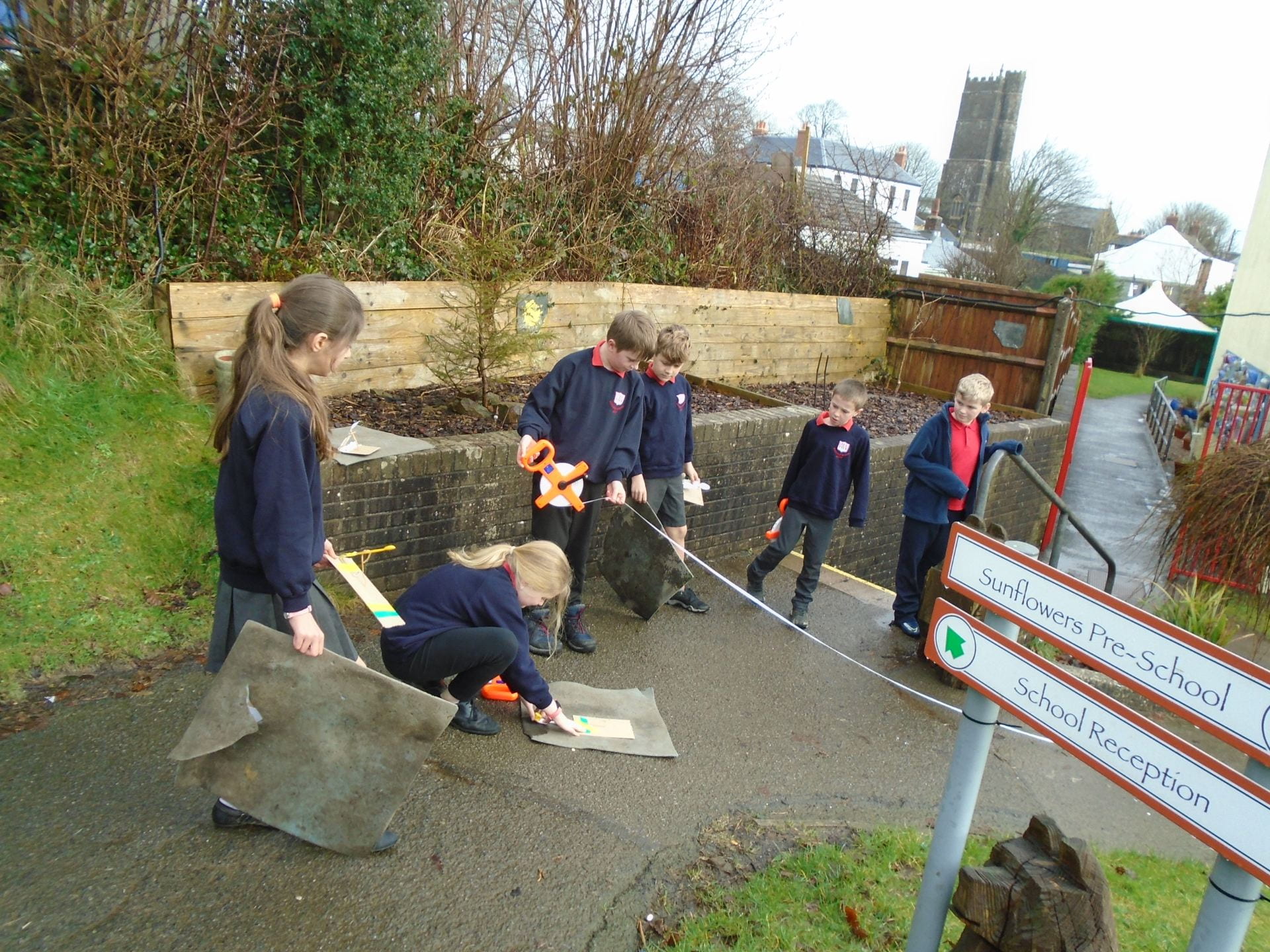 Ashmansworthy class have been learning about forces in science. We made catapults out of card, an elastic band and a spoon and tested them to see how far they could fire a missile. We had some amazingly long distances everybody’s catapults were a success. 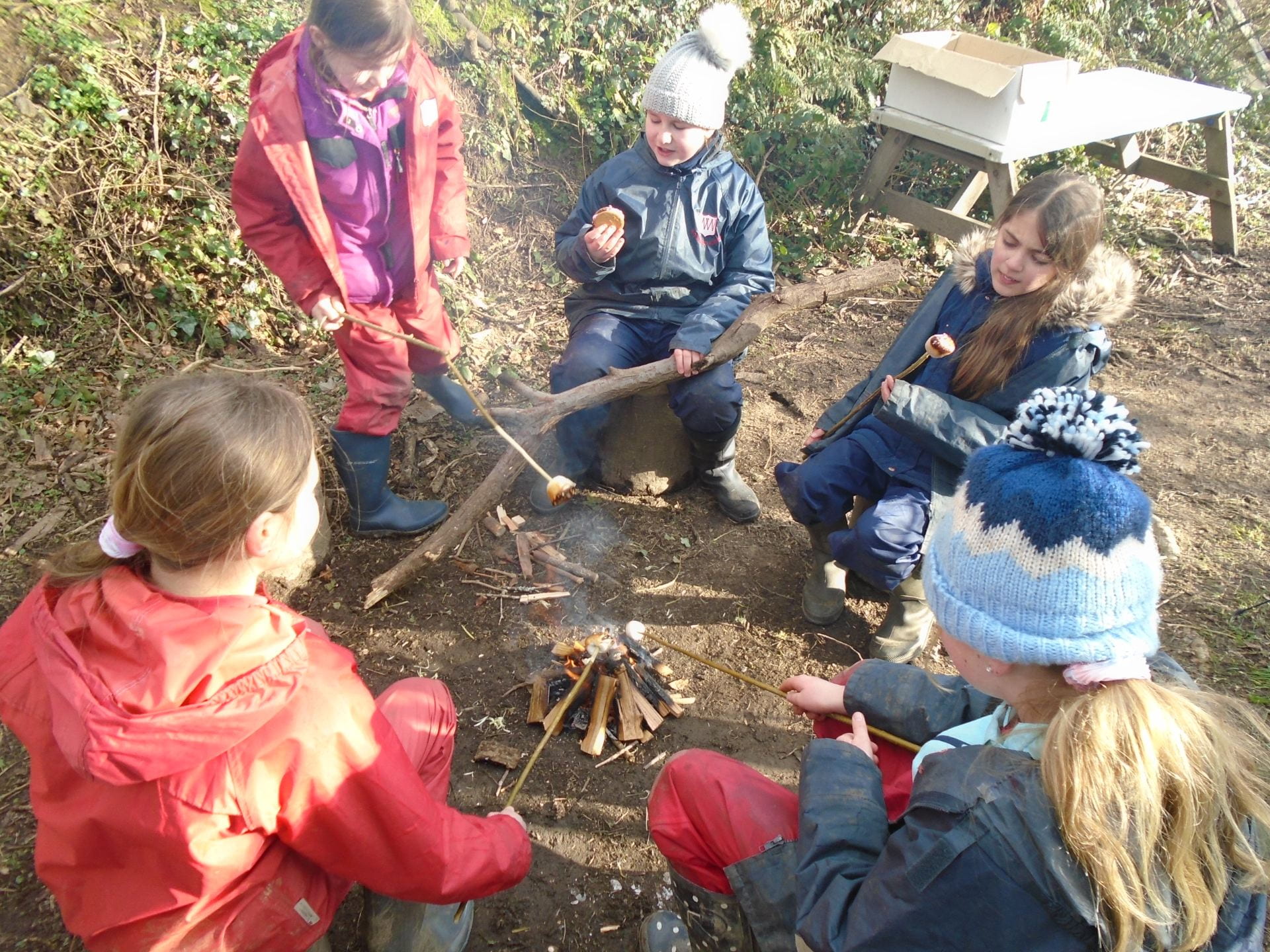 Ashmansworthy worked together in groups to light a fire and toast marshmallows in the freezing cold yesterday. Every group successfully used a flint and steel to light their fire and they all enjoyed their smores.

Posted on February 4, 2021 | By cbutlerwoolsery 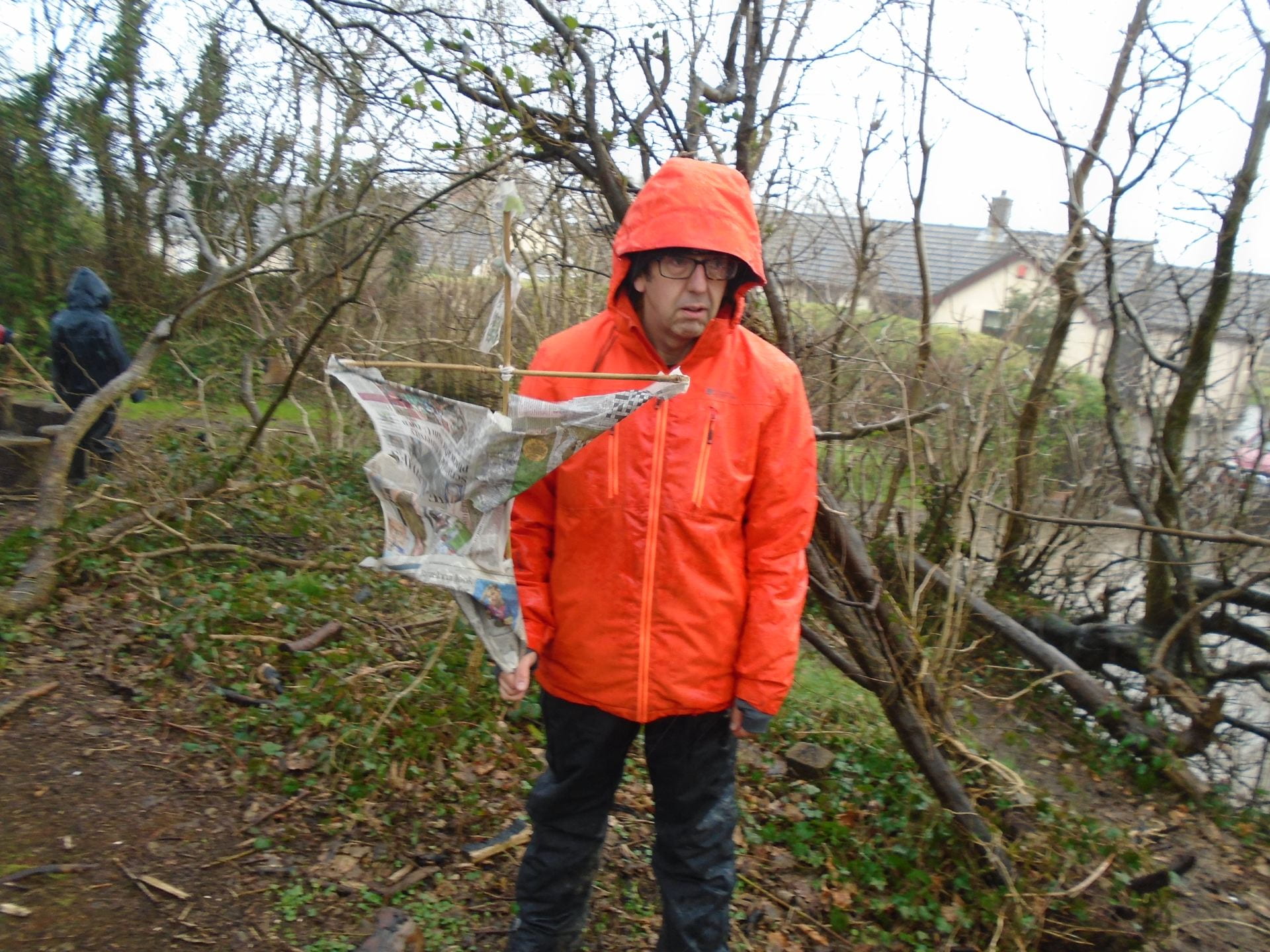 Ashmansworthy class made kites in forest school. We used sticks and plastic bags. We investigated what forces were acting upon the kites and how we could make them fly better. We found out that the bigger the area of the kite, the greater the air-resistance. Mr Penning discovered, after a sudden downpour, that newspaper is […]

Ashmansworthy class have been busy with their outdoor learning. Last week in forest school Mr Pennington showed the children how to make bird feeders using seeds and lard. We have also been testing out parachutes which we made in science. We were investigating what would happen if we changed the shape or material the parachute […] 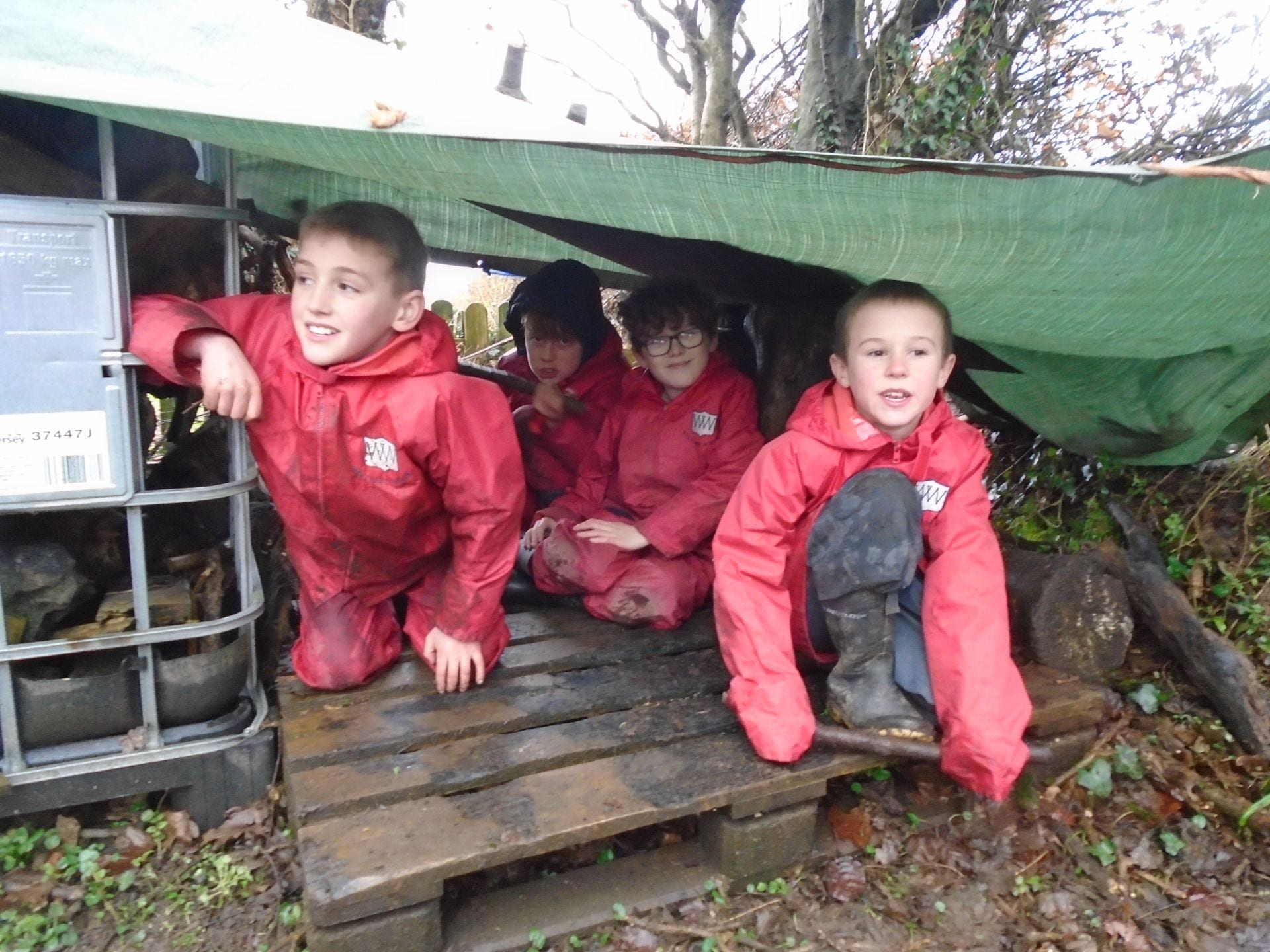 This afternoon, Ashmansworthy class worked in teams to build air raid shelters from the materials they could fine around the forest school area. They showed great problem solving, communication and teamwork skills and had fun completing the task. When we got back into class, we practised an air raid drill like the children would have […]

Ashmansworthy class have been designing and screen printing images on tee shirts. They also designed the background graffiti wall on which they are displayed. Great work Ashmansworthy!

Ashmansworthy class have been busy with their Christmas cards, calendars and painted pebbles. Here is their work. 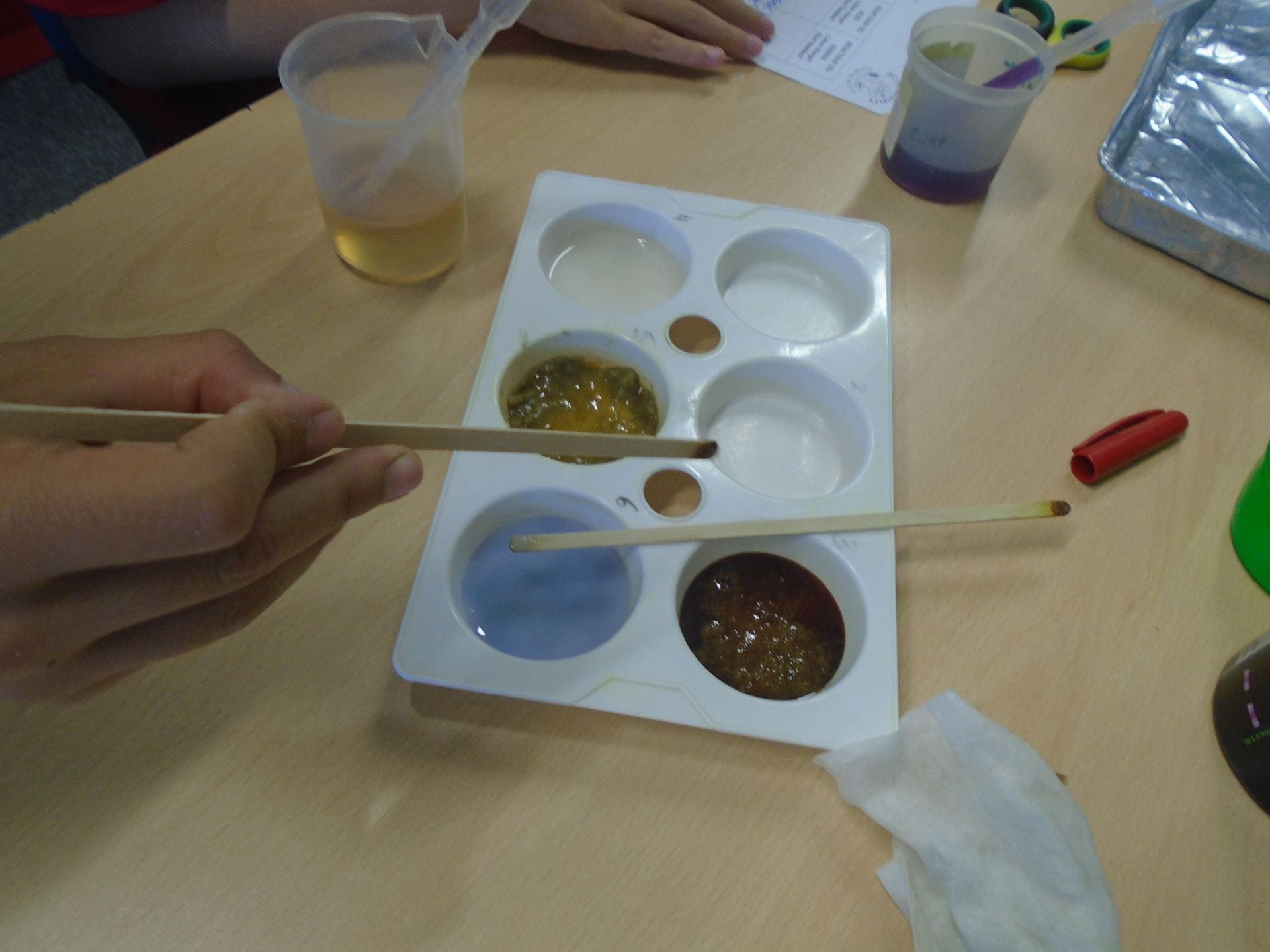 Ruth from Sciencedipidy visited Ashmansworthy Class yesterday to teach us how to use forensic science techniques to solve a crime. When we arrived at school, we found the crime scene in the yurt. Someone had stolen the diamonds from the piggy bank and the children had to use the evidence from the crime scene to […]

Shelter-building in the rain 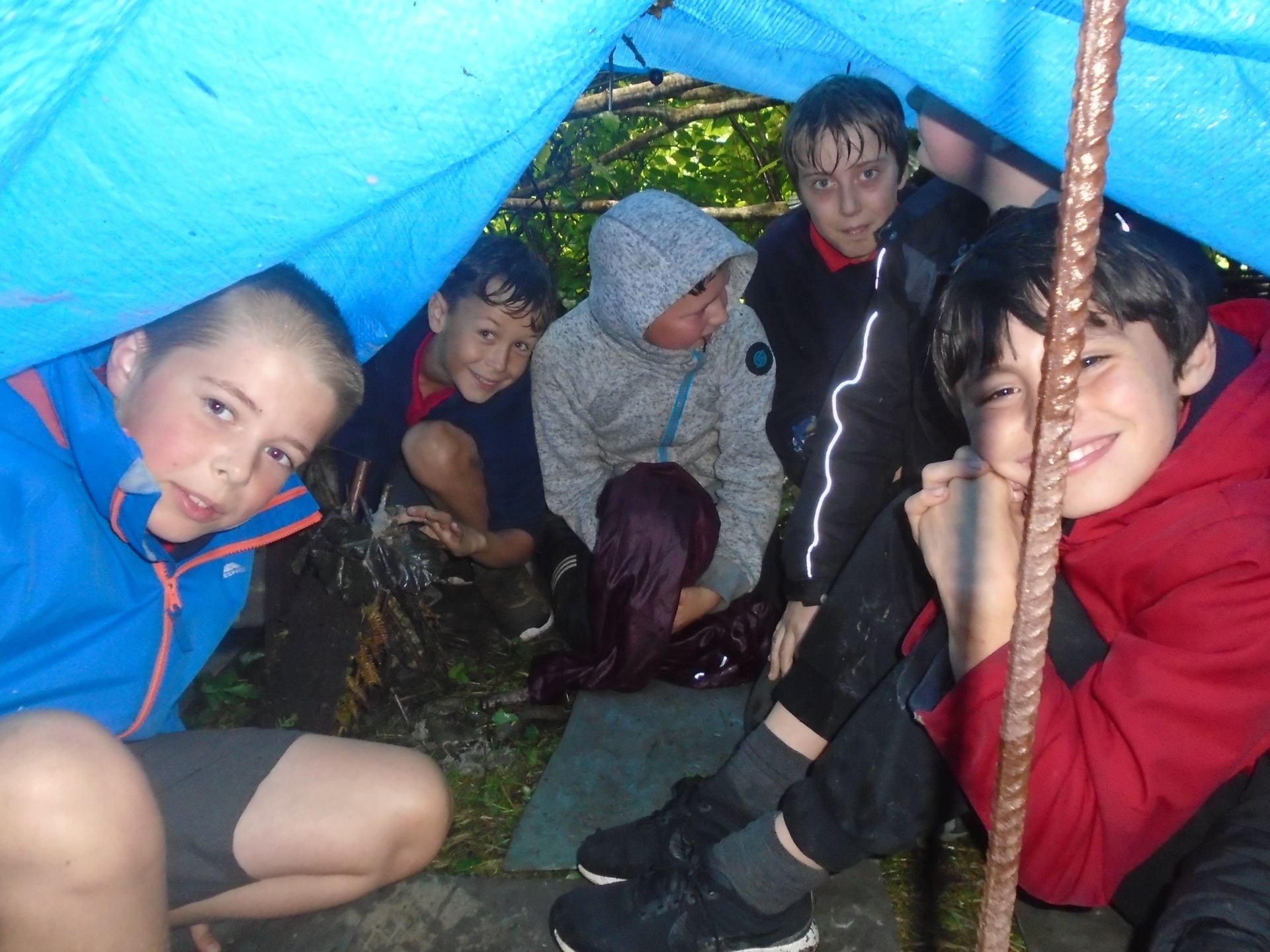 This afternoon Ashmansworthy class had to work in teams to build a shelter in the forest school area. They had to communicate and co-operate to solve problems to complete the challenge. They had a tarpaulin each, rope, string and some bungees They all did really well and were very imaginative with their designs. One even […] 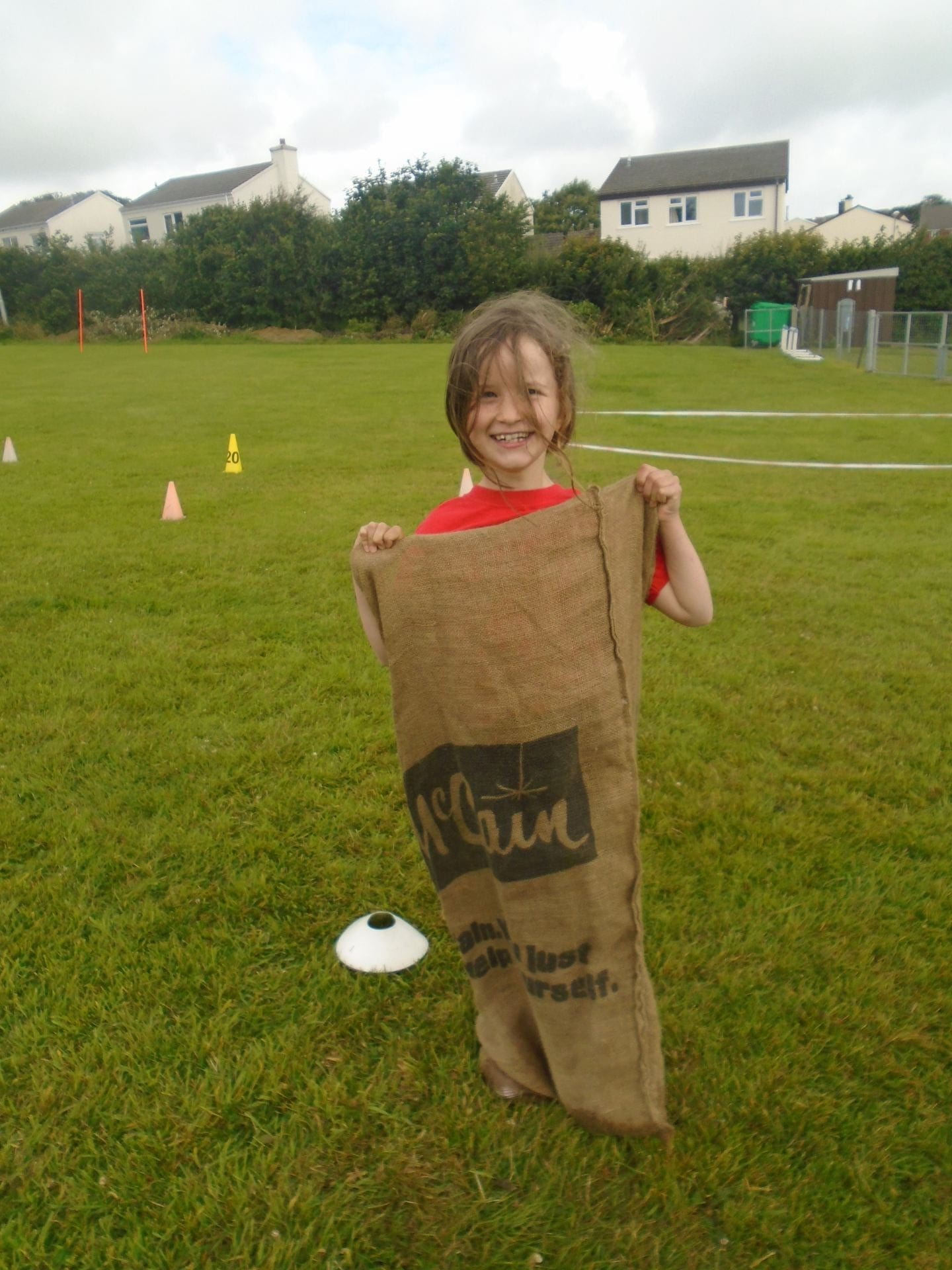 The sun shone today for our sports festival. The children had fun with their different sports activities and then took part in some races at the end. Thank you Mr Davies for organising it! 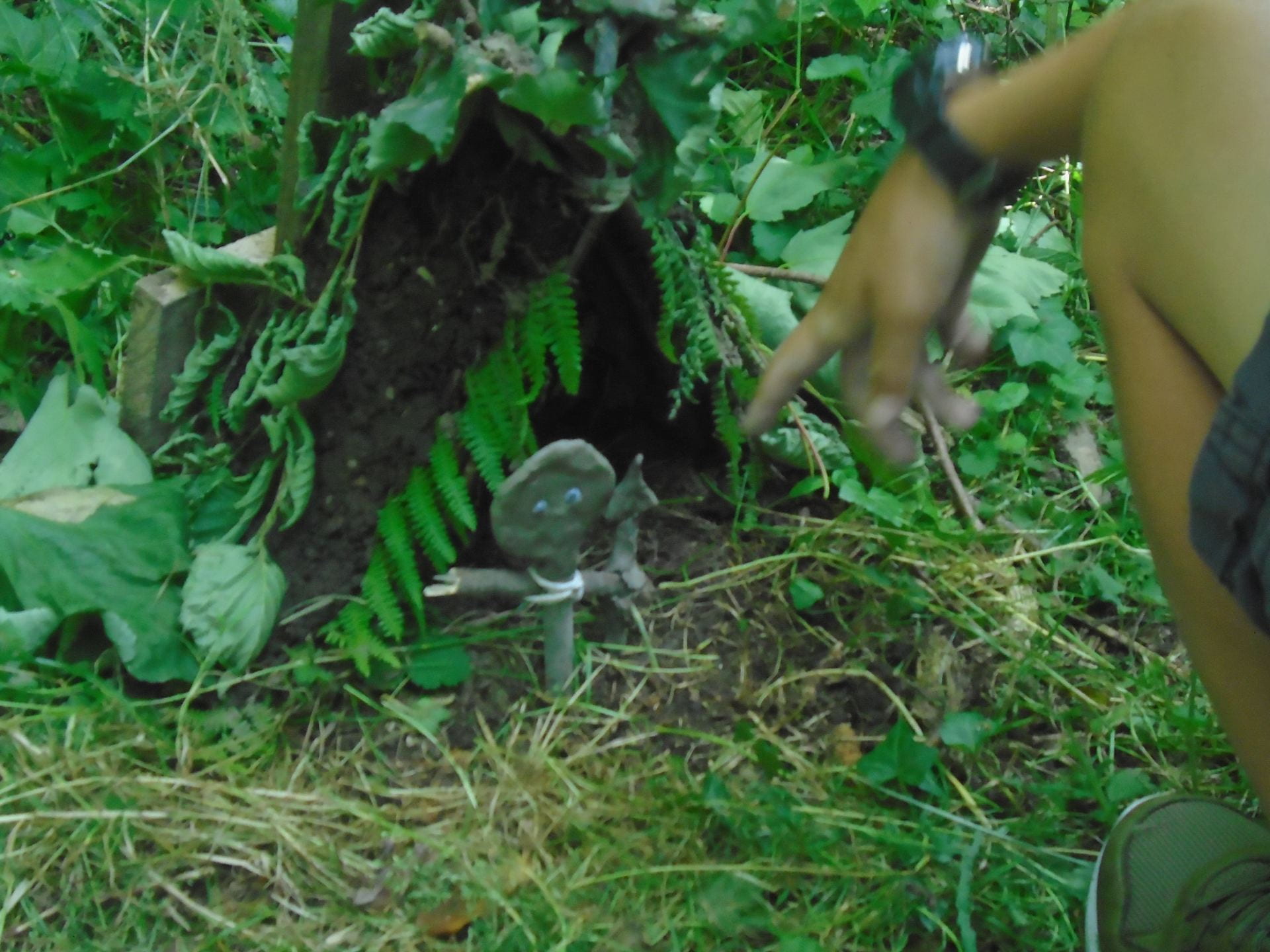 Year five and six have been busy in forest school this week making shelters and stick men. Here are some photos… 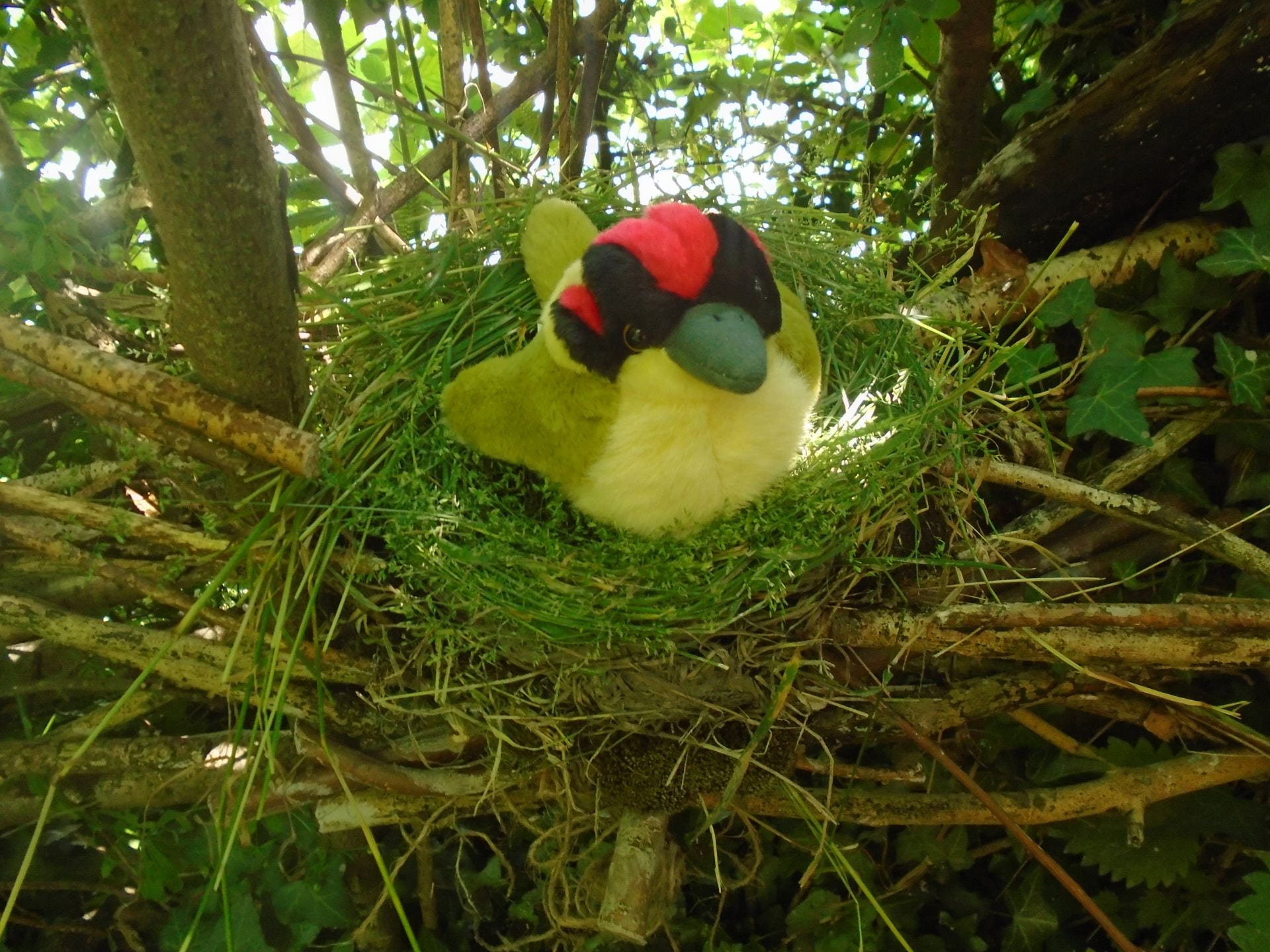 Today we went for a walk to collect materials to build a bird’s nest. After collecting a range of moss, feathers, sticks and leaves, we built the nests in the forest school area. Look how cosy they are! Charlie the chaffinch was very impressed! 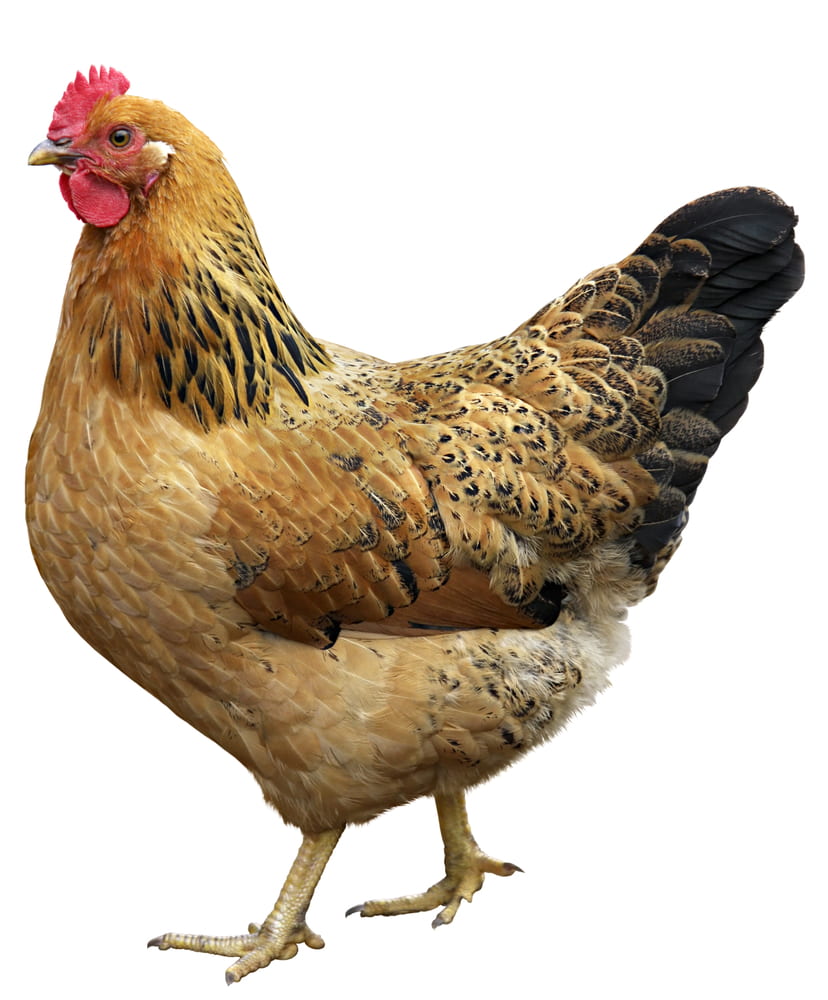 Hunter has been busy filming a documentary about chickens. Here it is! 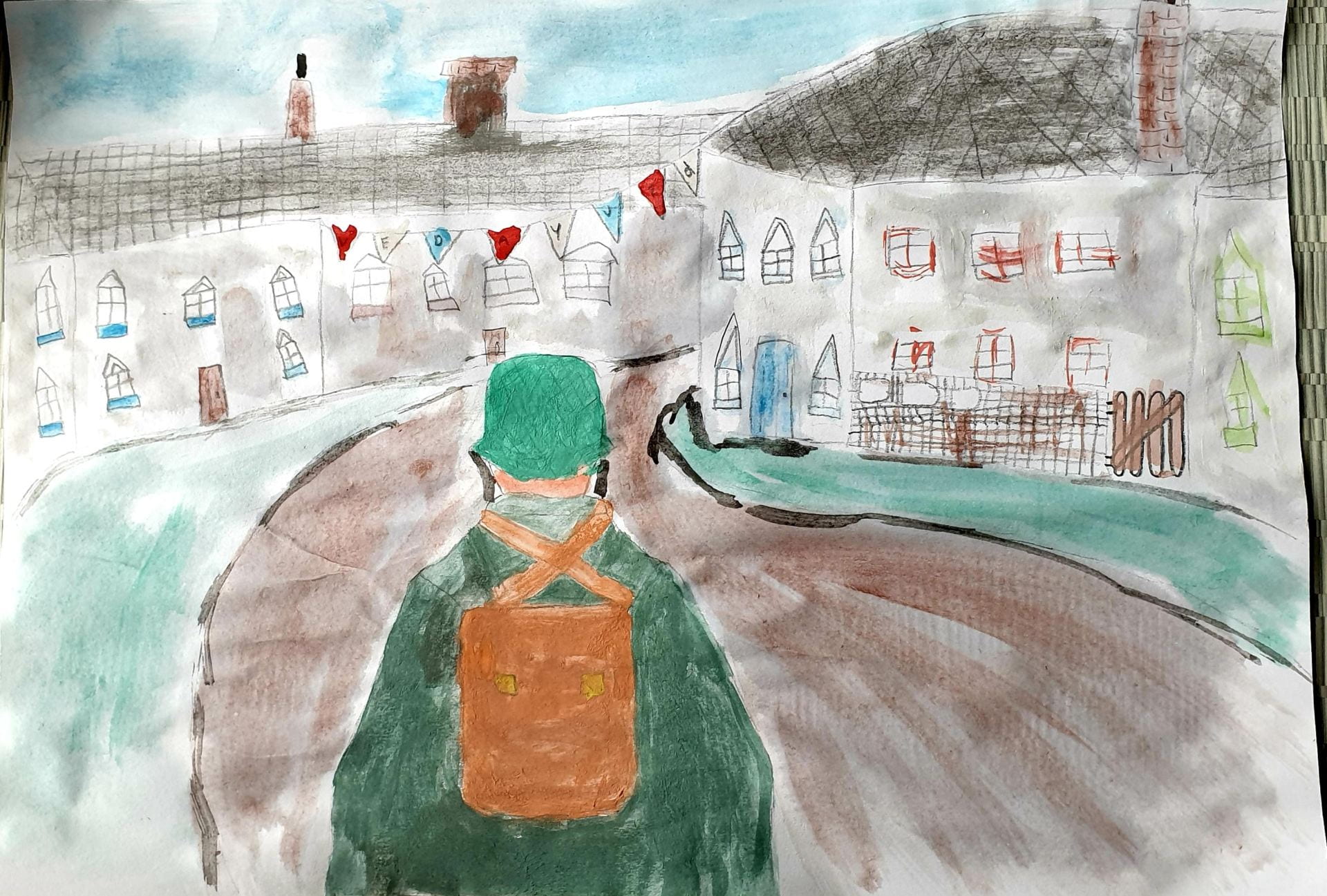 Here is some work from Ashmansworthy Class to mark the 75th Anniversary of VE Day. 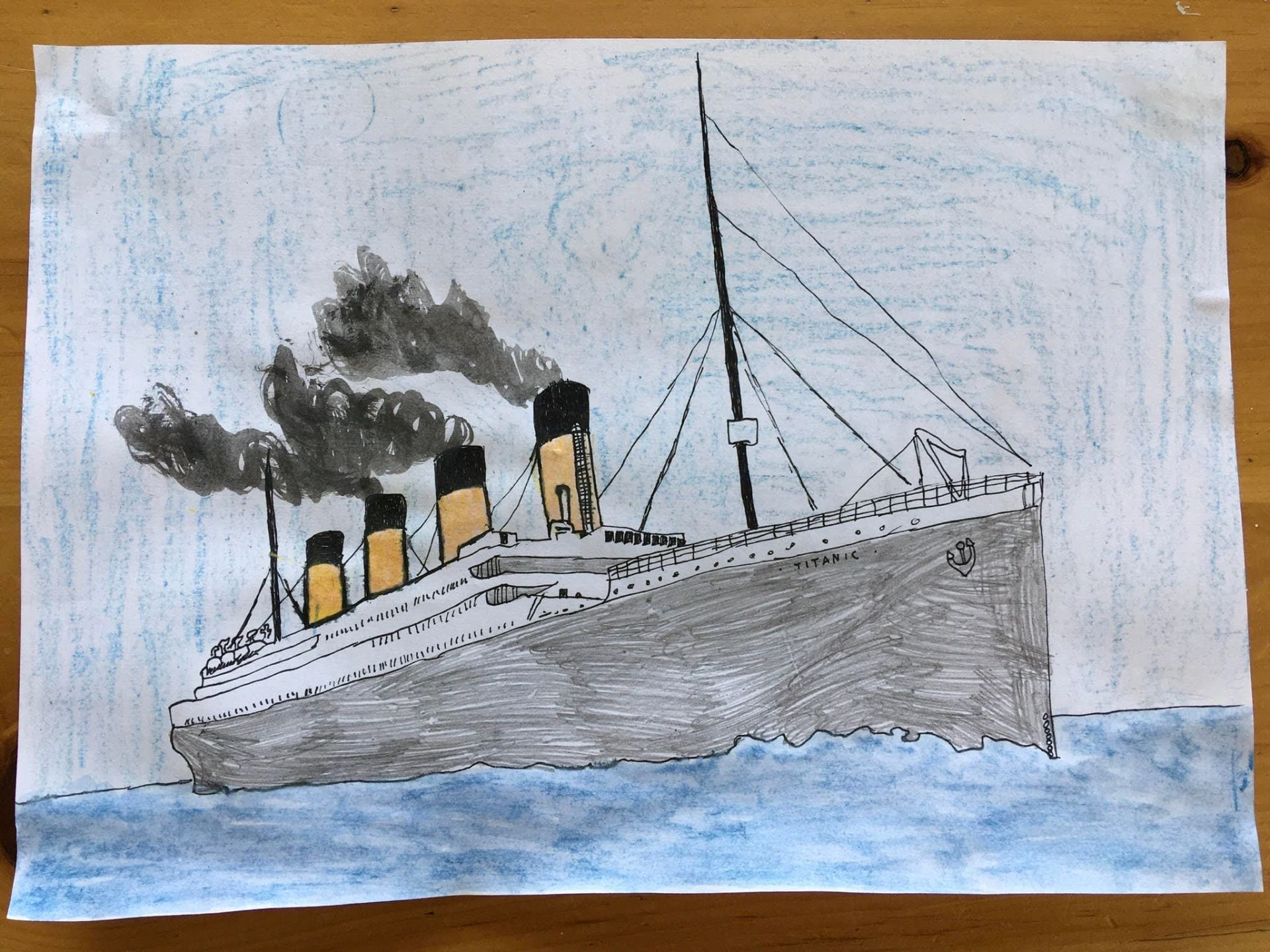 Ashmansworthy class have been learning about the RMS Titanic which sank in April 1912 after hitting an iceberg in the Atlantic Ocean. They have produced some amazing artwork as part of their remote learning. Here is their work. Click on the photo to see who produced it. Please give your feedback in the comments below. 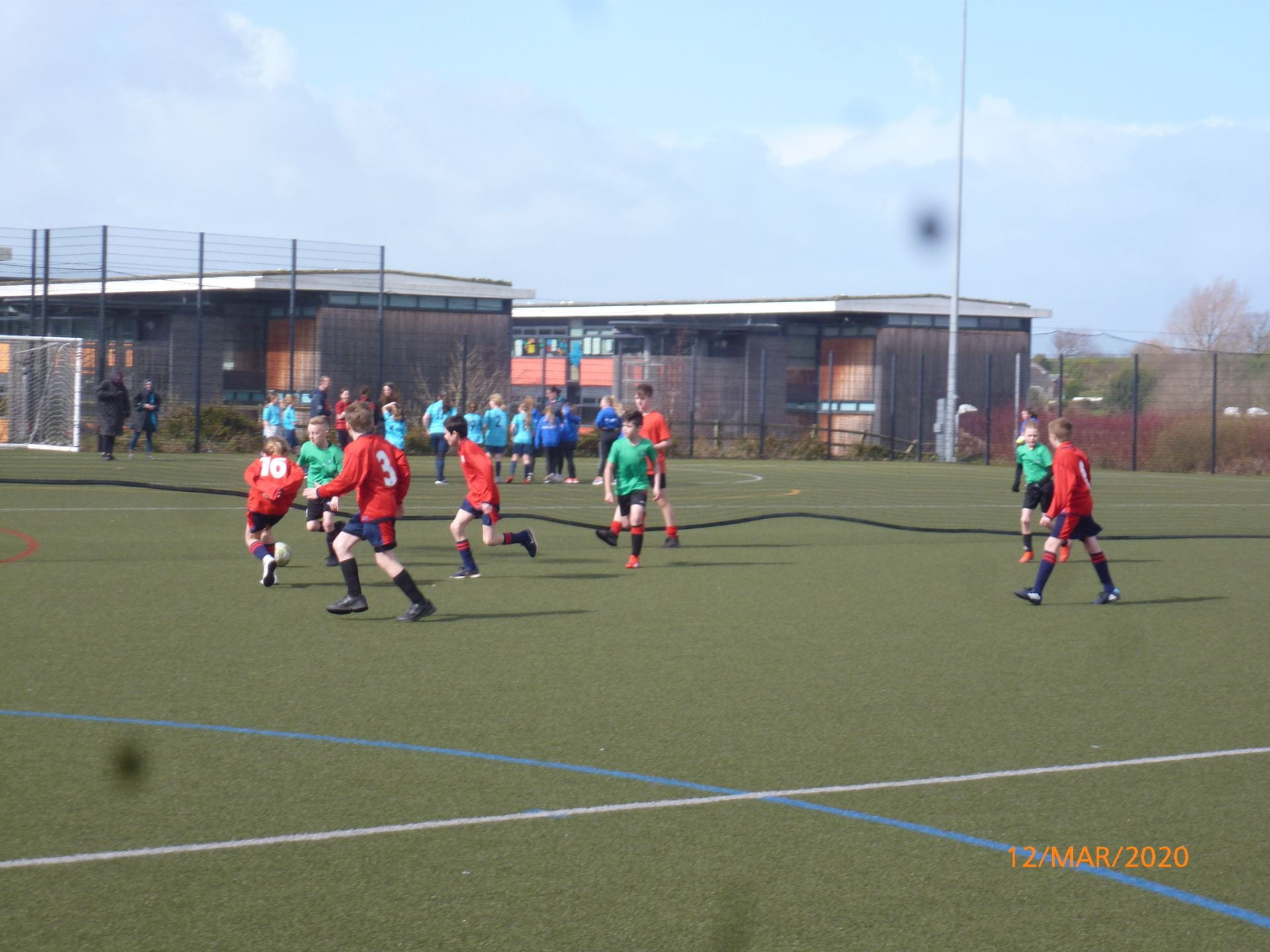 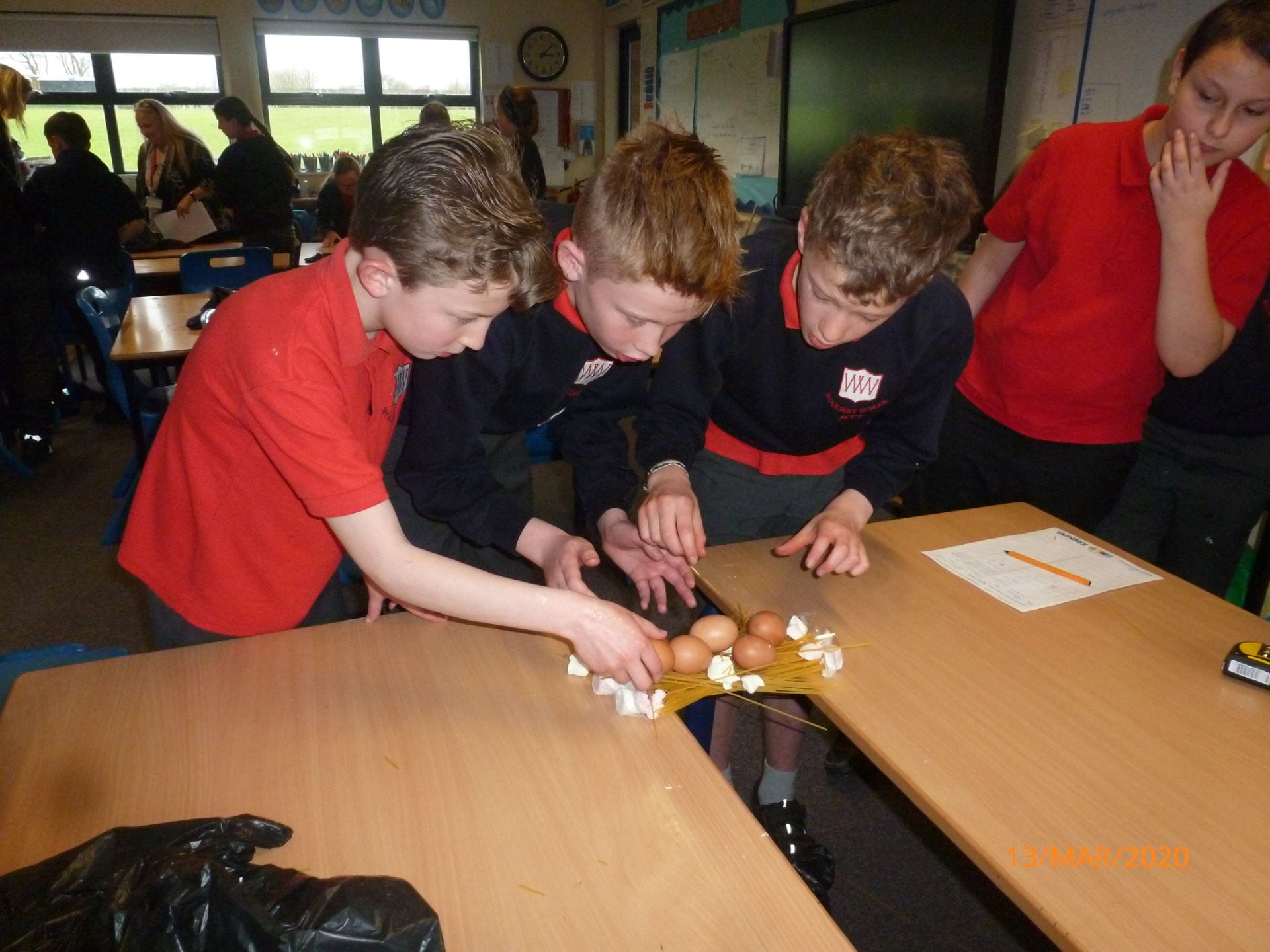 Ashmansworthy class had to work together to construct a bridge to hold the maximum number of eggs, as this year’s spaghetti challenge. Using raw spaghetti and marshmallows, they had to plan and build a bridge before testing it with raw eggs. It did get messy at times but we had some “eggsellent” designs! Here are […] 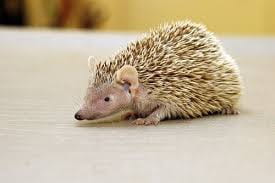 Ashmansworthy class had some special visitors from Exmoor Zoo today. Steven from the zoo came with his menagerie of animals, many of which came from North America to support our project. We were able to see a corn snake, giant land snail, mice, an owl and an amazing creature which looked just like a hedgehog […] 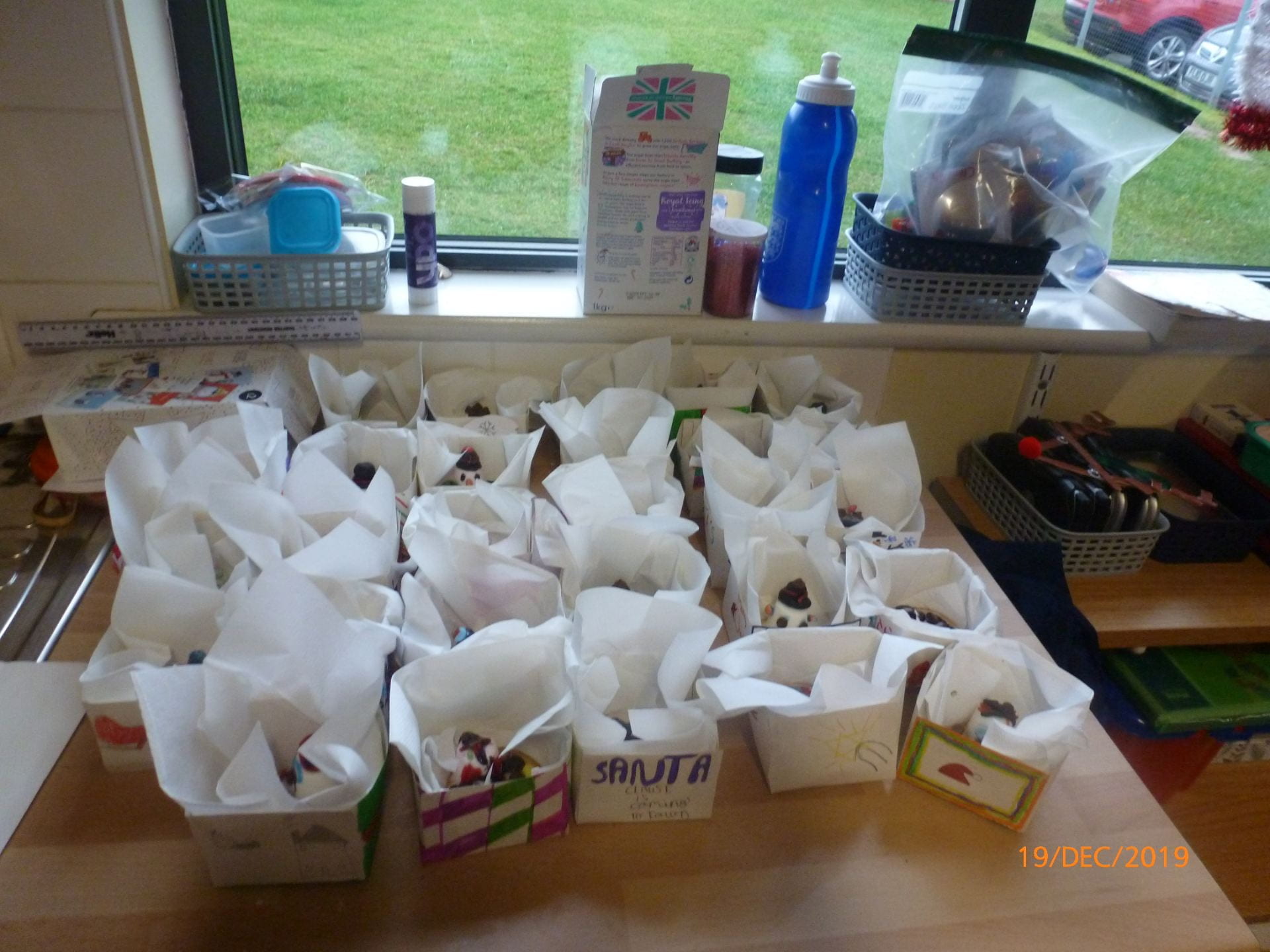 Ashmansworthy class had a busy morning making melted snowman biscuits using a rich tea biscuit, marshmallow and icing. They spent ages decorating them and they all look fantastic. They also had to construct and decorate a box to put it in. Don’t they look amazing?