Good morning everyone, from sunny Bude! You will be pleased to know that everyone was settled by 11pm last night. However, I am not sure whether 5am qualifies as morning or the middle of the night; the boys definitely decided it was time to get up, chat, and generally get ready for their day. Two hours later when the “wake up” bell went off, they were wondering why they were bored… Hopefully, after a busy day today body-boarding and doing the team trail, they will at hopefully sleep a bit later. Despite this early start, everybody enjoyed their run or early morning dip in the sea pool. After some “gentle encouragement” from me, everybody was fully refreshed and ready for their breakfast of hash brown, sausages and spaghetti hoops! 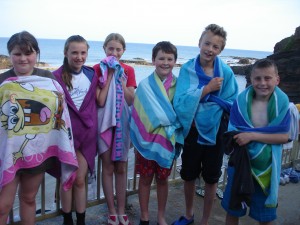 3 responses on Monday morning swim in the sea pool